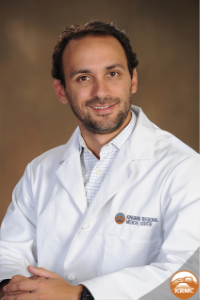 As a general surgeon, Dr. Capriles is skilled in the surgical treatment of a number of diseases and disorders, which include hernias, breast tumors, gallstones, appendicitis, pancreatitis, bowel obstructions, colon inflammation, and colon cancer. He is also skilled in preparing vascular access for hemodialysis patients. Dr. Capriles prefers to use laparoscopic and minimally invasive procedures to minimize trauma to the patient.

Dr. Capriles received his medical degree in 2002 from the Jose Maria Vargas School of Medicine at the University of Central Venezuela, in Caracas, Venezuela. He then completed a five-year residency in general surgery at the prestigious Morehouse School of Medicine in Atlanta, Georgia. While at Morehouse, he was Chief Resident in general surgery, primarily serving at Grady Memorial Hospital in Atlanta. In 2010, he was named Chief Resident of the Year by the Department of Surgery at Morehouse.

Prior to his residency training, Dr. Capriles served as a field doctor to Yanomami Indians in the Venezuelan Amazon jungle. He says that the somewhat dangerous experience was both exhilarating and humbling. The Yanommai are very isolated and do not readily accept outsiders, especially modern doctors. Over time, he was able to earn their trust, and some would allow him to treat their illnesses and injuries.

In reflecting on his experience in the Amazon, he says it gave him valuable insights on human nature and increased his devotion to helping others. He sincerely values the doctor/patient relationship and works to establish a good rapport with his patients by listening to their concerns and thoroughly answering their questions.